The one-minute spot is inspired by the wagamama philosophy that food does not just feed us, but nourishes our soul. The video follows the protagonist as she visits a local wagamama branch, while switching to scenes of a chef preparing what we would realize will be her order. After taking her first bite, it takes an adventurous turn where she falls into an alternative rural japan.

She then finds herself sailing on a gyoza in a river of ramen, standing in a field of coriander, and watching fireworks made from spices. The ad aims to appeal to new customers by focusing on the feeling inspired by the food, and not the food itself. 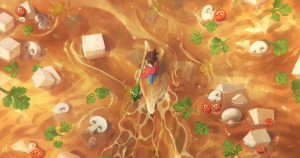 Director at Passion Animation Studios, Mads Broni, used the combination of hand-drawn and computer illustrations to bring to life the anime-inspired ad.

The whole animation looked like a traditional anime, but infused with the iconic landmarks of the city, and a real wagamama location in Old Street. Though the ad was obviously influenced with the Japanese art form, each movement seemed so lifelike that you can’t help but either want to cook or find a ramen shop nearby.